I swear, I came upstairs an hour ago to work on today’s blog…and then this happened: 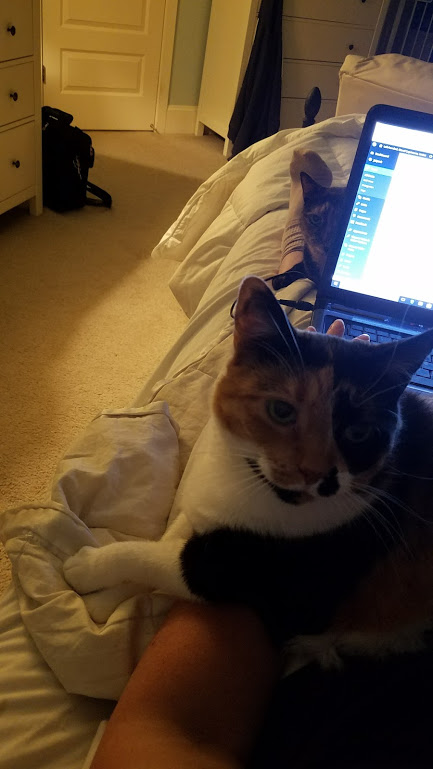 It’s kinda hard to type with a 19-pound cat draped across your arm. Since the girls seem to want to be the center of attention today, I suppose today’s blog should be all about them….

One day towards the end of May 2007, I  went to my father’s house for a visit. In addition to my dad and my stepmother, my sister and her husband lived there as well. My sister was expecting her first child, and they were staying with dad temporarily to save up for a house. Unbeknownst to me, my brother-in-law’s cat had recently had kittens, and we spent most of the afternoon playing with the two-week-old bundles of furry  cuteness.

There were three kittens, all female – a calico, a tortoiseshell and a gray striped tabby. The tabby had already been spoken for, but homes had not yet been lined up for the other two. I had an 18-year-old cat at home already named Jane Doe, and had decided awhile back that whenever Jane finally  went into the light, I was going to take a couple of years off of cat ownership… just to be free to travel without having to worry about pets for awhile. No way was I taking one of those kittens. Nope. 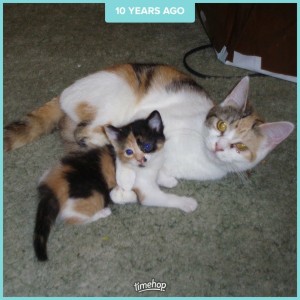 I went back the next weekend to see them again. Not because I wanted one, of course. I was just there to…help socialize them. Yeah.

In an extreme moment of  weakness, I told my sister that IF she wasn’t able to find a home for the calico, I MIGHT be willing to CONSIDER taking her. I mean, what’s another 20 years of scooping cat shit, anyway, right? What my sister actually heard was, “I’ll take the calico.” I’m fairly certain there were no further efforts to find her a home after that.

Resigned to my  fate, I started the process of coming up with a thoughtful and meaningful name for the cat. My method was quite scientific. It involved me blurting out any and every random word that came to mind, then my daughter rejecting it as a name . Driving down the highway, I would yell out, “Pothole!” and Megan would shake her head, and say, “No!” “Median?” “No!” “Speed Trap? Oh shit…[slams on brakes]” “No!”

This went on for several days, with no success. One afternoon, though, we had a breakthrough. “Traffic Light?” “No!” “Roadkill?” “Eww! No!” Then, as we drove past a motorcycle dealership…”Harley?” “No!” “Davidson?” “That’s a boy’s name. No!” “Harley?” “You already said that. No.”

But wait…it was perfect. The Harley Davidson logo is black, white and orange. The kitten was black, white and orange. Guys that ride Harleys have a little bit of an attitude. I was already getting the impression that this 3 week old kitten had a little bit of an attitude. The more I thought about it, the more I liked it. The next time I went to visit, the kittens were about 4 weeks old. I held the calico in the palm of my hand and crooned, “Aww, sweetie…would you like for your name to be Harley?” and I swear, she tried to bite me. “Ok, bitch, Harley, it is.”

A few days after that, the little gray tabby got sick and died, leaving only Harley and the tortie, whom my sister and brother-in-law had started calling Tiny. When they were 5 or 6 weeks old, my sister came to me with a proposition.

“What would you think about taking both of the kittens?” My first thought was that obviously the pregnancy hormones were making my sister crazy, but I bit my tongue and let her plead her case. Since losing the gray kitten, she’d gotten very attached to “Tiny,” but she wasn’t in the position at the moment to take on any more pets. Would I be willing to keep the other kitten until she and her husband had a place of their own?

I pointed out the one glaring problem with her plan. There was no way on earth I would be able to raise a kitten for 6 months to a year and then give it away to someone else. “That’s ok, ” she said, springing the trap nicely, “at least if she’s with you, I can come visit.”

So yeah, then I needed to come up with another name, because no cat of mine was going to grow up named Tiny. 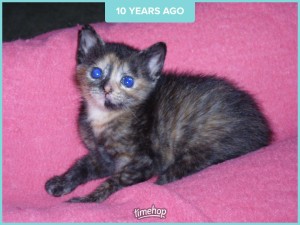 The second name was a little easier. I wanted something that went with Harley. “Davidson” was out, because as Megan had already pointed out, it was a boy’s name. I went to the Harley Davidson website for inspiration, and found it. One of their bike models was called the Dyna. I liked the name, but not the spelling…so after a little tweaking, Tiny will forever be known as Dinah.

I’m pretty sure the whole thing was a set-up. 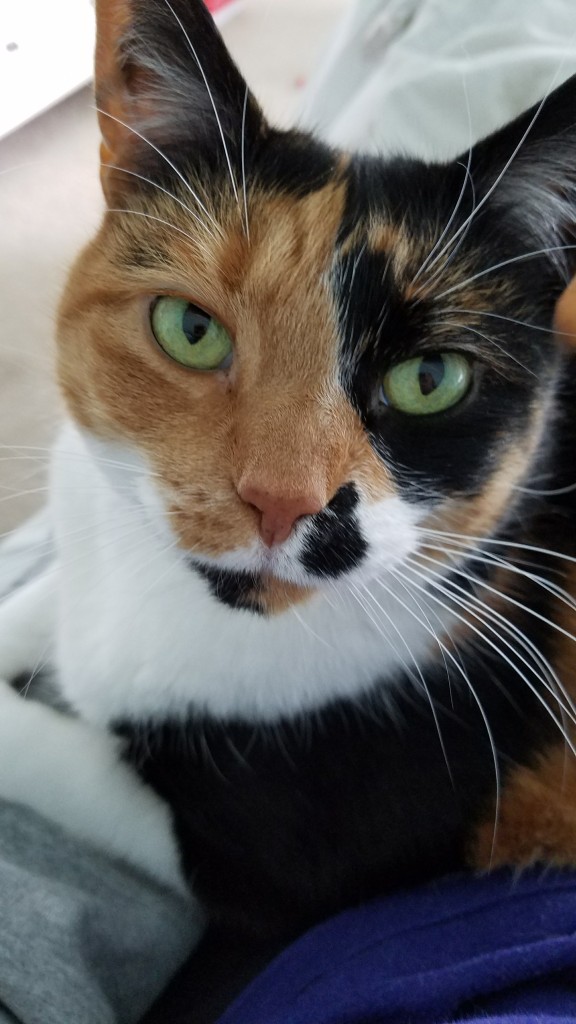 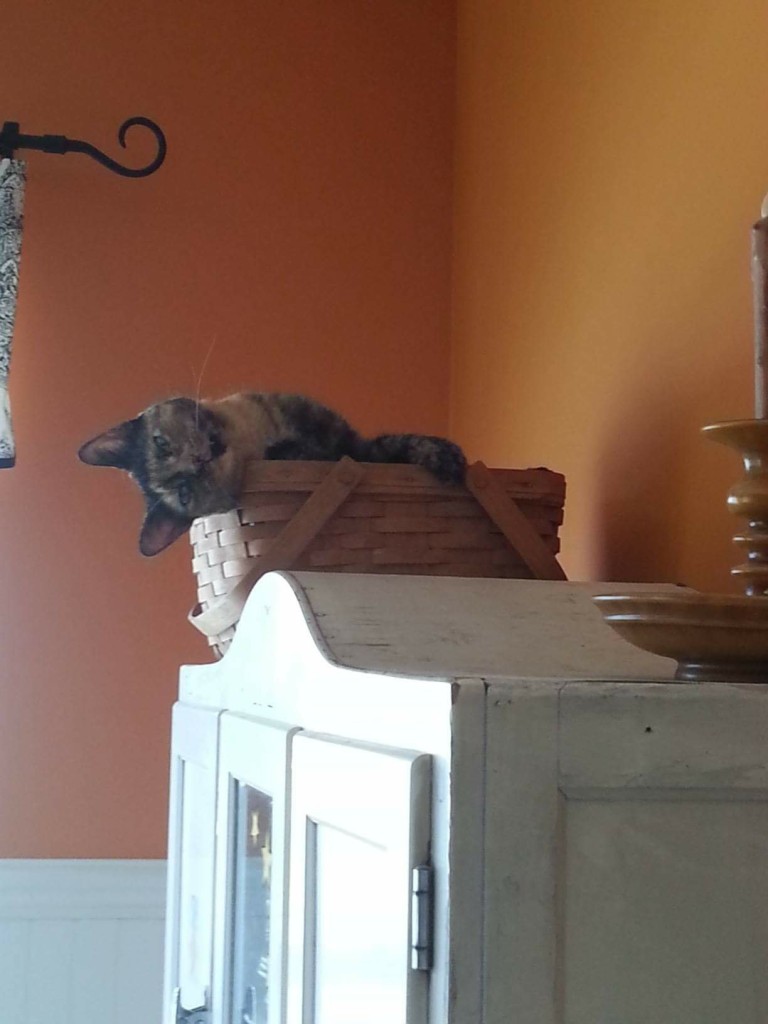